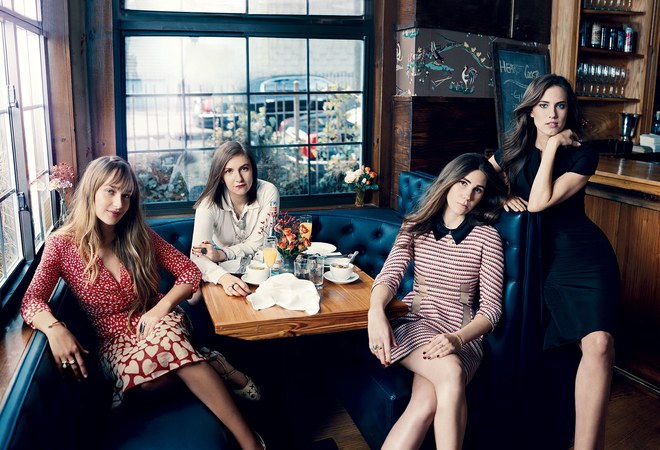 Finding Myself in Hannah Horvath

I felt restless. That was the final push toward New York—the all-consuming stagnation that stifled every cell in my body. I couldn’t do it anymore.

When I graduated from college four years ago, I felt like I graduated into nothingness—like my diploma signified the culmination of a lot of hard work that ultimately wouldn’t take me anywhere. College had been the grandest of times, but I had chosen an impossible industry, and graduation left me filled to the brim with my dreams and drunk with my curiosity and determination and . . . restlessness. I spent the first few months of freedom trying to spin gold out of thin air while hatching my great escape from Michigan. If you’re from the suburbs and stay in state for college, there’s a high chance you’ll end up there forever. But I wouldn’t accept that fate, and neither would Hannah Horvath.

I found Girls during my junior year of college. In between classes and extracurriculars, I was scandalized by the excessive nudity but hooked by the raw, tantalizing place they called Brooklyn. It wasn’t the only reason I moved to New York, but it certainly played a role. When I finally got here, I found that the city on the show was nothing like the city I lived in. Except when it was.

Girls was the talk of the town during its six seasons on HBO, and throughout its run, I’ve had my own criticisms—the whiteness, the gratuitous lean into hipster culture that never accurately represented my New York experience, the way that Hannah freely swears in front of her parents. But Girls got so much right too: the way this city opens your eyes, how it swallows you up; the feelings of youthful arrogance when you’re on top of the world, when you feel invincible; chasing, hustling, achieving, failing.

I spent a lot of the series hating Hannah. I found her to be whiny and petulant, altogether very childish. But Hannah Horvath is a dreamer, and so is Radhika Menon. “I haven’t left my mark on this city,” Hannah says in “The Goodbye Tour.” This mentality is the thesis of dreamers, of artists—it’s what keeps me here too. We both followed this fire, this love for the arts and desire for greatness, across the country, unequivocally determined to make something of ourselves.

New York, in its many iterations, is always a representation of what is possible. It attracts people like us who are restless in our pursuit because it promises not success but opportunity. Book jackets weave stories of home bases in Brooklyn. Film and television regularly set the scene in this great city as the most optimal playground for its young characters. Creative minds actually transplant their lives here. It always comes down to the Big Apple—and even though Girls didn’t open with Hannah’s decision to move, I felt the highs and lows of her journey.

Maybe it’s because the final season premiered right after I turned twenty-five—firmly in “quarter-life crisis” territory—I never realized (or maybe I didn’t want to believe) how much Hannah and I had in common until the series ended. The pursuit of writing is obvious: I have toyed with submitting essays to the New York Times‘ Modern Love column (deeming them all unfit in the eleventh hour) and looked into attending The Moth’s StorySLAMs. But there have been other parallels. I had my own Adam, my own undefined hookup buddy I held onto far beyond our expiration date, not realizing how hard he was pulling away . . . like a dog holding onto the leg of its owner as they leave for work on a Tuesday morning. My Adam didn’t leave me for my best friend, but he left me nonetheless while my feelings were still all-consuming. Hannah couldn’t make the clean break; notoriously, neither could I.

And just as Hannah wondered whether she had failed at her dreams and overstayed her welcome in New York, so too did I. In the “Golden Age of Television,” you can find a plot line that relates to every facet of life as you know it, and this was no different—it just hit me harder. “New York hasn’t brought me anything but misery,” she says. It’s a harsh and crude statement, but there are countless days where I’m consumed by the idea of a fresh start in another city—mostly fleeting thoughts when I hate my day job and can’t spark the match on my various side hustles, but I think about it nonetheless. Like what if this was all a mistake? What if I had moved to LA instead? The fear of failure is wrapped up in life’s everyday monotony. Then I remember the incredible high I felt packing my belongings into a suitcase and booking a one-way flight at age twenty-one. The magical pull.

I felt that pull in every frame of Girls, and I wasn’t wholly prepared for the loss I felt when it ended in April. I would never say Girls was a perfect representation of my New York, but it surely captured a feeling. The way the final season understood this specific moment and these young adult hesitations cemented itself as a season I’ll revisit whenever the light begins to dim again—because I know it will dim again. Girls put words to my emotions and a landscape to my inner monologue. It wasn’t perfect because life isn’t perfect, but that’s why I loved it.