Is “Fly” the Most Divisive Episode of Breaking Bad?

Rewatching “Fly,” Breaking Bad’s thirtieth episode and almost exact midpoint, I had to laugh at its cold open, a montage of close-ups of flies set to “Hush, Little Baby.” Watching it when it first aired over seven years ago, I probably didn’t laugh at all—it’s a well-shot, mysterious, interest-piquing opening—but now the episode’s reputation precedes itself. Like many bottle episodes, fans either loved watching Walt and Jesse try and (almost) fail to kill a fly in the meth lab for forty-four minutes, or they hated it.

I was one of the fans who loved it.

From its pilot onward, I watched every episode of Breaking Bad as it aired. When “Fly” happened, I remember being obsessed with it; it was unique, funny, and tense at the same time, with an artistic style all its own. But my friend Bob had a very different experience:

“When I watched ‘Fly’ for the very first time,” he says, “I was at the tail end of a binge in the truest sense of the word. Father’s Day had just passed, and I had bought my father the second season of Breaking Bad on DVD, even though the third season had finished airing and I knew he was caught up. We spent that day watching the first season together, and he let me borrow his own gift from me to keep watching after I drove back to my mother’s house the next day. It was the last summer I lived at home, toward the middle of college, and I was working weeknights closing at Burger King while all of my friends had much cushier day jobs, so I didn’t have many people to spend my spare time with.

“For 72 hours, I did nothing but watch Breaking Bad. After crushing the DVDs, I found all of the season-three episodes streaming online illegally. It was incredible, and I couldn’t get enough of it. That is, until I watched ‘Fly.’ The episode put a halt to what had been a nonstop roller coaster ride. It felt extraneous to me. I couldn’t understand why they’d spend so much time away from what was such a high-energy series for Walt’s megalomaniacal quest for his bite-size white whale. I couldn’t wait for the episode to end, and I honestly never thought I would return to it.”

Which is exactly why I asked him to.

With a vastly different opinion of the episode than Bob, I was curious to see if our thoughts would change (for better or worse) and why after rewatching and reevaluating it within the context of the whole series.

One of many brilliant shots in “Fly.” (Image: AMC Networks)

When I rewatched, I picked up on a lot of subtle directing choices I don’t think I had at first. Walt, stripped of both power and control after the appearance of the fly, is mostly shot from high angles, making him appear diminutive and weak. Of course, the fly itself is a symbol—for Walt’s nagging guilt over letting Jane die, for Jesse, for Walt himself. I don’t think any one answer is correct. But first-time Breaking Bad director Rian Johnson truly embraces this metaphor, crafting shot after beautiful shot to create an episode that feels like a love letter to film rather than a bottle episode. Because nearly the entire runtime takes place in the meth lab, Johnson also finds new and interesting angles to explore, making the lab feel like a brand-new setting rather than one we’ve seen several times already.

After Bob’s rewatch, he agrees: “The cinematography in ‘Fly’ is some of the most varied and incredible camerawork I’ve ever seen in an hour of television. I’ll be the first to tell you that, as a twenty-year-old obsessed solely with narrative, this didn’t matter to me as much before. But now I can see Rian Johnson’s remarkable achievement of giving us as varied a shotlist as he could muster from a single location. This was undoubtedly aided by the fact that the episode centers on the movements of an erratic insect. We’re treated to shots from the perspective of a literal fly on the wall, alongside a mess of close-up, claustrophobic shots of our two main characters as they’re stalked by it. Maybe I’m more into it because I’m excited for the director’s turn at the helm of a Star Wars film this winter, but it worked much better for me now than when I first saw it.”

“The cinematography in ‘Fly’ is some of the most varied and incredible camerawork I’ve ever seen in an hour of television.”

I was happy we agreed on something, but I wanted to know what exactly frustrated him the first time around. He points to the episode’s lack of success hiding the fact that it was made due to budget reasons. “Traditionally, bottle episodes are made with a bare-bones cast and crew to save money for much larger productions toward the end of a season, and that is glaringly obvious here. I can’t help but wonder if this is the episode we would have gotten if Breaking Bad had its season 5B budget during season three. Would we have gotten something that served as the calm before the storm, as this had? Of course. But would it have been an hour focused entirely on the death of an insect in the meth lab? I don’t think so.

“All these years later, I can see the validity in both my original frustration with the hour and your initial obsession with it. It’s a beautifully shot character study, and a necessary breather during a dramatically taxing season. But at the same time, during the first ten minutes or so, I still felt like it dragged its feet a little during Walt’s solo attempts to catch the insect on his own.”

Fair. From a plot standpoint, the first act doesn’t exactly inspire confidence in the episode as a whole, but . . . that cinematography though. Honestly, if the cinematography and shots are interesting enough, I could watch a three-hour movie void of all plot and dialogue and still enjoy it. But after hearing Bob’s point of view and rewatching the episode myself, I caved and realized I’d given “Fly” some undeserved free passes in the past.

Watching Walt try to catch the fly on his own for fifteen minutes makes the first act drag, and the stakes are only raised later when Jesse finally joins him in the lab. “Toward the end,” Bob says, “I found myself enrapt with the monologues Jesse and Walt told each other, and I loved the way they perfectly encapsulated where they were each at at this point in the series.”

Like Bob, I’d argue that their relationship in this episode is the only thing that elevates the hour to non-filler status. For most of the series, Walt has called the shots, but now he’s manic, out of control, and throwing his shoe at a fly, giving Jesse room to be the head honcho, the voice of reason. For example, Jesse offers explanations for why half a pound of their product is missing every batch (like ”that thing that happens to your beer in the summer”). He tries to calm Walt and take care of him at every turn, then eventually gives in to Walt’s plan and buys an assortment of fly-catching products before handing Walt a coffee with sleeping pills crushed inside.

In one tense scene, Walt hits Jesse hard with his makeshift flyswatter (or “flysaber,” as Jesse calls it) right before the fly lands on Walt’s face. Beyond frustrated, Walt asks Jesse to hit him in order to kill the fly. Jesse, suddenly all smiles and enthusiasm, promises to “make it count,” grabs the flyswatter, and lands an even harder blow right to Walt’s head. It’s one of Jesse’s most powerful moments in the whole series and turns their relationship on its axis—for an episode at least, Jesse is the one who knocks. 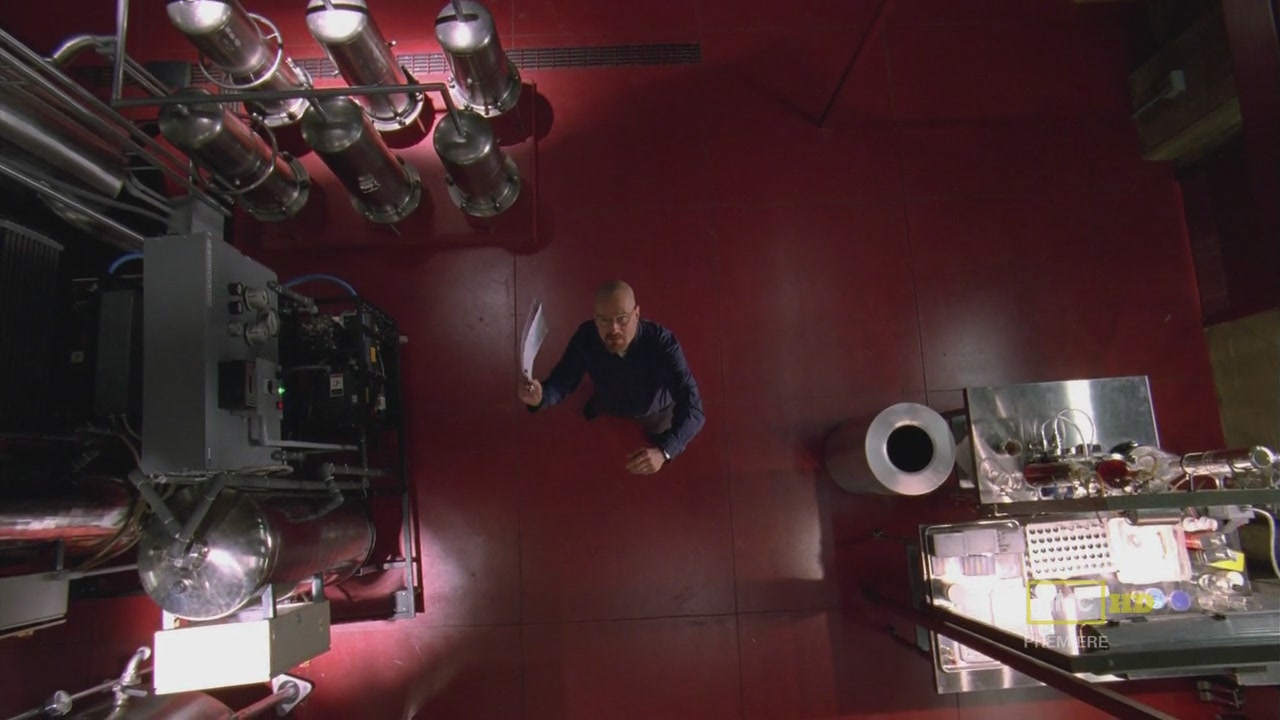 The fly looks down at Walt. (Image: AMC Networks)

Bob says that in 2010 he would have considered “Fly” an unsuccessful episode. “In the context of a binge, ‘Fly’ pulled me out of the action in a way that made me feel let down. I pushed through the boredom I felt in the moment but couldn’t get over the bad taste in my mouth left by the hour. If what was quickly becoming my favorite series could disappoint me this much in its third year, then who was to say it wouldn’t continue to do so from there? Luckily for me, that wasn’t the case, but I’ll still never forget the terrible experience I had watching ‘Fly’ for the very first time.

“Now, seven years later, I’d almost argue the opposite. Sam Catlin and Moira Walley-Beckett’s script in the third act serves almost as a thesis statement for Walt’s entire experience throughout the series. During his monologue to Jesse about drinking with Jane’s father, you can see the wheels spinning in his mind, telling him he’s already ‘broken bad’ and is past the point of no return. If he’d only just died in that moment, in his home, listening to Skyler and Holly on the baby monitor when he had enough money and she had no clue how they’d made it, maybe everything would have been OK. You can see him desperately wanting to hang on to the person he was before it all started, but in the end, while warning Jesse of his inability to protect him, he chooses to move forward with his inevitable transformation.”

“I’ll still never forget the terrible experience I had watching ‘Fly’ for the very first time.”

The scene Bob is talking about is the penultimate scene of the episode. After Walt passes out from the sleeping pills and Jesse finishes the next batch on his own, Walt all but accuses Jesse of stealing the missing product and warns Jesse that he won’t be able to protect him if he’s caught. Jesse, defensive and still coming down from his power high, tells Walt he doesn’t need his protection. The tense moment is heartbreaking, as it undoes Walt’s emotional (and intentionally vague) apology to Jesse about Jane and, as Bob states, places Walt firmly back on his dark path.

So doesn’t that mean the episode ends where it began, with Walt back in his position of power ready to cause more trouble, making “Fly” filler after all? Well, sure, Walt doesn’t seem to change much by the end of the episode, but Jesse certainly has, and those moments they spend together in the lab trying to swat a fly—abusive, tearful, and funny—propel their relationship in an entirely new direction, creating conflict that builds throughout the entire second half of the series.

Before passing out, Walt tells a now-fly-addicted Jesse to come down from the ladder he’s standing on. “He’s not coming down,” Walt says about the fly. “He’s staying up there forever.” But Walt is wrong.

After he falls asleep and Jesse swats it with a rolled-up newspaper, the fly falls.