Looking at Marriage Through the Lens of Catastrophe

My fiancé, Dan, and I just finished watching season three of the excellent Amazon show Catastrophe starring Rob Delaney and Sharon Horgan. When it ended, with a devastating final shot of Rob’s face as he confesses his failures to Sharon, I dove into Dan’s arms on the couch. “I’m so sad!” I said as I looked at him. “That made me so sad!” “I know!” he said and put his arm out, inviting me to burrow deeper into his side.

Dan reminds me of the character of Rob on the show, in that they’re both ad guys from Boston who are funny and friendly and can give a great bear hug. I’d marry either, but I only get to marry one—and soon, since our wedding is this coming September. We’ve been engaged for a year and a half now, and being an anxious overthinker, I’ve spent lots of that time dissecting the idea of marriage in my head and writing journal entries about my expectations and hopes and fears. I want to go into this marriage with my eyes wide open, knowing we’re signing up for a joined lifetime of happiness that will, inevitably, include some pain.

I want to be a wedding realist. I want to take Dan and his family and our life together, warts and all. (Though, to be fair to Dan, I should be perfectly clear that medically speaking I am the one who has dealt with actual warts.)

Catastrophe has always been a realistic show, but this season, that reality grew deeper. In its first season, Sharon and Rob meet, have a one-night stand, end up pregnant, and then end up married. In the second, they deal with the exhaustion of being new parents and the specific agony that comes from a deeply unfulfilling career. Though their romance is rushed, and sometimes it seems like they’re still just getting to know each other, they are a good pair through it all. But that knowledge doesn’t discount the strain and anger that always feel close to the surface.

Marriage—as I understand it, having not yet taken part—is an extended attempt at the best intentions.

In season three, tensions bubble over, and Rob starts drinking again. The show brilliantly presents Rob as a reformed alcoholic right off the bat—as soon as we meet him, we know he used to drink and now he doesn’t. In my mind as a viewer—and in Sharon’s mind too—that issue was all wrapped up. We didn’t see it, but we imagine it sucked, and he did the hard work to get sober, and now he is! Sharon resents that she doesn’t have a husband who will get sloshed with her, but beyond that, it’s a nonissue . . . until it is an issue, and then the biggest one. 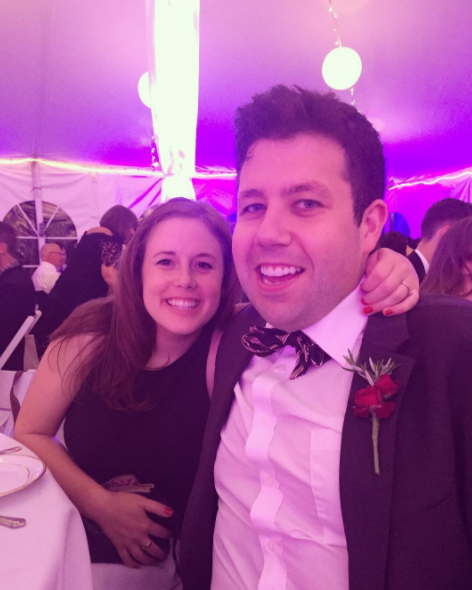 My soon-to-be-husband, Dan, and me.

These eight episodes are a study in secrets and shame, as Rob keeps drinking when Sharon’s not around, and Sharon tries to work off her guilt at having sort of cheated on Rob (though, to be fair, she only handled a penis, and they were on a very Ross-and-Rachel-like break at the time). They muddle through together, making mistakes.

Dan isn’t an alcoholic, and during our four-plus years together, I have not handled another man’s penis, nor do I have any intention of ever doing so. As a couple, our similarities with Rob and Sharon are pretty much null. We don’t fight often, and when we do, we’re not big yellers. We know each other inside and out. We have the best intentions for each other, all the time—and I guess that’s where maybe we do coincide.

Marriage—as I understand it, having not yet taken part—is an extended attempt at the best intentions. Dan and I were talking, once, about what we would do if the other person ever cheated, how we would handle betrayals large and small. I brought up some podcast I’d heard where a man said he loved his wife unconditionally. “But that’s not it,” Dan said. “This kind of love isn’t unconditional. It’s actually very conditional—it’s conditional on treating each other well, and caring for each other. It’s conditional on doing the work to be kind and present and part of things.”

I hadn’t thought of it that way, but he was right: Unconditional love sounds pretty, but it’s actually kind of a mess. Parents have to love their children unconditionally, but the rest of us would do well to make some demands. So marriage is an agreement to work together and be good to each other and love each other for it. It’s an agreement to do our best, because we want to. Because what we have is good.

Rob and Sharon’s marriage is the same. They fumble and spend nights apart and come back together. In the final shot of the season, Rob faces Sharon with tears in his eyes, defeated, and she leans into him, suddenly aware how much he needs her. It’s so different from the final shot of season two, which cuts off as Rob is mid-yell. This time, it implies they’ll help each other instead of pull away. It is sad, just as sad as I thought it was right after watching it—but it’s not without hope.

I don’t think Dan and I will have a marriage just like Rob and Sharon’s. We like each other’s families better, for one thing. And we’ve spent years together, living as a unit, working on being us. But who knows what’s ahead, aside from the complications of being alive? Things have been so good so far. We ask ourselves and each other, “Shall we continue?” And we both say yes—to staying together, to loving each other, and to standing side by side as we face the completely unknowable whatever comes our way.