I spent some of the last hours of 2017 live-tweeting the second half of Fuller House season three. I hoped that maybe after tackling the first half hungover in the fall, I could get it out of my system. But, nope, that didn’t happen, and I’m not proud of it, but I still did it anyway. I chose isolation and cookie-cutter nostalgia over the bitter New York cold and warm embrace of friends. I could have gone out—I probably should have gone out—but, for some reason, wasting away those last few hours of a garbage year with utterly terrible television felt appropriate.

Honestly, it’s been long enough that I probably can’t remember most of what actually happened in these episodes. I mean, there’s that one where DJ breaks up Steve’s definitely racist Japanese wedding because she’s in love with him and another when Stephanie decides to let Kimmy be the surrogate for her and Jimmy Gibbler’s baby, a plotline that, in the moment, I absolutely could not get over. The children are all generally terrible people in all of them (as per usual), and, a few times, Jesse Katsopolis stops by to remind us why this show even exists in the first place.

After sixteen episodes, Jesse and Becky’s new adopted baby is finally given a name other than “Baby” or “Oreo” (it’s Pamela). Danny and Becky lose their jobs, but then Becky gets hers back. Steve and DJ, after waiting a month to “be respectful to their respective exes,” almost don’t get back together once he gets an offer to be the official foot doctor of the LA Knicks. DJ gets him out of that one by beating an actual famous basketball player in a push-up contest, because nothing says “I love you” like crushing your partner’s hopes and dreams.

After sixteen episodes, Jesse and Becky’s new adopted baby is finally given a name other than “Baby” or “Oreo” (it’s Pamela).

Watching these last nine episodes as December came to a close showed me something I may have been aware of before but couldn’t actually ignore this time: Fuller House is a veritable amalgam of the sticky-sweet, feel-good nostalgia we all expect coupled with hints of Candace Cameron-Bure’s strict Trumpian values and sprinkled with Bob Saget’s filthy stand-up routines. It shouldn’t make sense, should it? And yet, for some reason, Netflix has decided to continually write paychecks to everyone involved. 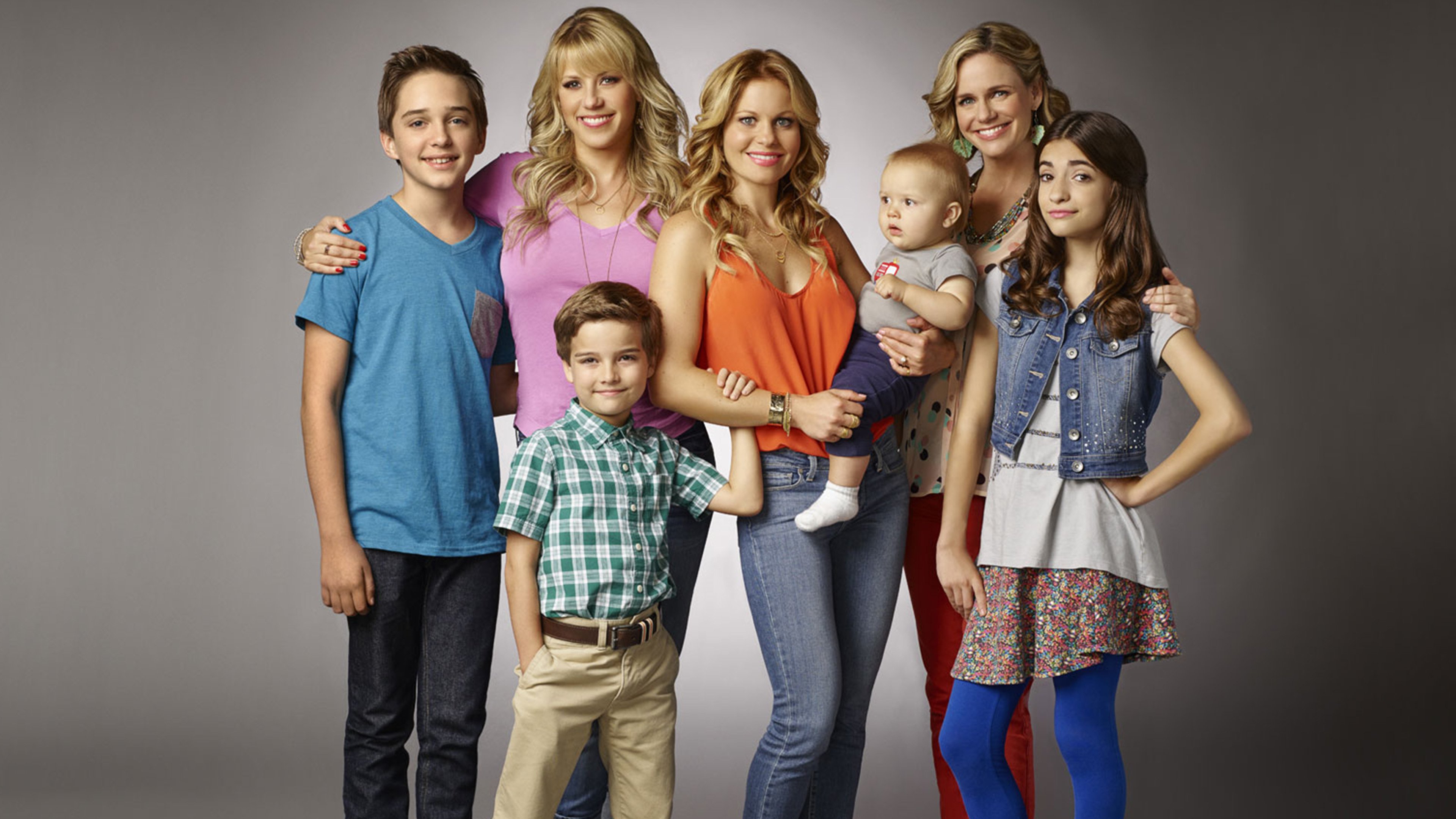 Cameron-Bure’s conservative values are buried in the middle of a lot of surprisingly adult comedy, but the show doesn’t shy away from them; it wears them proudly on its sleeve. There are plenty of MAGA jokes, everyone gets a good chuckle at the school lunch attendant who constantly says “fake news,” and Max, the middle son, is legitimately thrilled to be compared to a Fox & Friends host. What really struck me, though, was the consistent predatory behavior by men (and boys) toward DJ.

DJ’s eldest son’s best friend, Mankowski, has a crush on her that escalates throughout the season. It goes so far as to have him get into a hot tub with her and a more age-appropriate man with whom he’s competing for her affection. They both join DJ while her eyes are covered by cucumbers, legit freaking her out—and, at that point, what had been played for laughs actually made me uncomfortable. I’m sure the writers thought this was all in innocent fun, but I couldn’t help but wonder what they were trying to teach their (presumably very young) audience. Yes, she successfully rebuffs their advances, but the implications that they couldn’t care less about her desires and see her as little more than a piece of meat are crystal clear.

At that point, what had been played for laughs actually made me uncomfortable.

At the same exact time, the show is riddled with filthy jokes that reminded me of Bob Saget’s post–Full House stand-up specials. Jimmy Gibbler’s “favorite moment of the year” is when he provides his sperm sample at the fertility clinic. DJ mocks Stephanie for having breast implants, and Stephanie later tells Max’s whole class that her only experience with ancient Roman history was a single “epic” night with an older man in Italy. Gibbler’s party-planning business is called “Gibbler Style,” and she complains that getting pregnant through surrogacy isn’t nearly as fun as it was with her own daughter. I couldn’t help but flash back to watching a 2008 video of Saget parodying Backstreet Boys to loudly proclaim that Danny Tanner wasn’t gay. 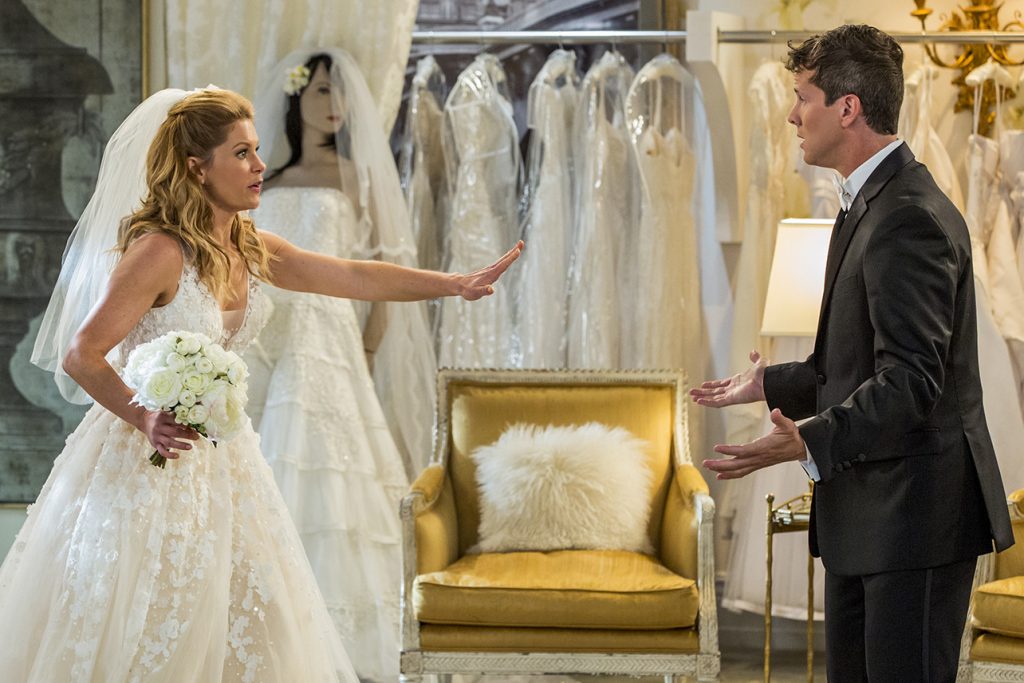 Saget and Cameron-Bure couldn’t (likely) disagree with each other more, but here they are mashing their sensibilities together to see what sticks. The disparate parts shouldn’t seem to work together, and yet I come back to hate-watch it every single time. I know this is a me-problem; I could just as easily skip this show like everyone else in their right mind, but I can’t do it. There’s just something about this mishmash of values that I find comfort in relentlessly mocking.

One thing I absolutely adore about Fuller House, though, is its commitment to making all of its characters utterly miserable. Jesse is terrified that, with Becky now fired, he’ll have to go back to having a job for the first time in who knows how long. Uncle Joey is depressed that his wife is going back on tour because now he has to spend more time with his four (four!) children despised by everyone else in the family. Kimmy’s kid, Ramona, gets into the dance high school of her dreams, only to meet a student ambassador who, despite being all smiles at first, silently pantomimes that she should get out while she still can. You’d think something so brightly colored and full of “family values” would cut their characters some slack, but nope. And it makes openly hate-watching them all the sweeter.

The season ends with Jesse and Joey buying the old Smash club (now a laundromat), so this way they can move back to San Francisco when season four premieres (yes, the show has already been renewed for a fourth season). Danny, still unemployed, decides to join them, making sure they’ll never have to explain why everyone’s still around again.

Jesse’s old band, Jesse and the Rippers, happens to be on hand at the club’s ’80s-themed grand reopening (doing their laundry) . . . and also happens to have all of their instruments. They get on stage to play an old song by Jesse and a brand-new original written by Stephanie, someone they presumably haven’t seen in three decades. I can’t even begin to understand the continuity or logic behind the Fuller House cinematic universe, but I won’t lie that it kind of delights me that such a thing even exists.

On second thought, I remember way more about this show than I’d ever care to admit. And now that I’m finally done with it (for the fourth time now), I can’t decide if Netflix’s release strategy is a blessing or a curse. Would I rather continue on as I have up until now, getting it all out of the way in a single sitting, or ingest it in smaller, more manageable chunks across half the year like a regular sitcom? I’m not entirely sure why, but that almost seems to me like it’d be a thousand times worse.