Steven BerkowitzDecember 30, 2017Over and Out

I love Scrubs beyond reason. It’s the show I go to when I’m sick or sad or lonely. It became the language that my son and I spoke to each other after his mom and I divorced. (We didn’t like sports.) I watch the entire series through once a year, sometimes twice, and have done so for a decade or more. With enough space between viewings, it rewards rewatching. It is an easy, gentle laugh—a comforting, familiar friend.

I know plenty of people who like Scrubs but not many who love it, which never made sense to me. It may not be the best show ever, but it’s damned good. Consistently smart and funny. Occasionally innovative. A broad farce that (usually) knew when to be subtle. It was made by talented people in front of and behind the camera who stayed true to a vision for eight and a half seasons. Yet, somehow, it didn’t leave much of a cultural impact. Sure, Zach Braff and Donald Faison are still adorable when they’re together, but the world is not exactly overrun with Scrubs memes and thinkpieces.

It’s a shame, because Scrubs had one of the best series finales in all of television history. Full stop. No qualifications.

Well, one qualification: The episode I’m talking about isn’t actually the series finale.

Scrubs did not go gentle into that good night, but neither did it rage. Instead, it had a messy three-year stumble to the finish line.

Scrubs had one of the best series finales in all of television history. Full stop. No qualifications.

The writers had been playing “Will they or won’t they?” with JD and Eliot since the pilot, hooking them up and blowing them apart about once a season. In the first half of the seventh season, the writers realized they’d ridden that pony as far as it would go and started laying the groundwork to bring JD and Eliot together for real during the second half of the season.

But there was no second half of the season. It got killed by the 2007–2008 Hollywood writers strike.

Season eight looked promising, though. They quickly reestablished JD and Eliot’s inevitability and brought them together in a healthy relationship. Aziz Ansari joined the show as one of the new interns, and they started to do some interesting storylines where JD, Turk, and Eliot were now mentoring the next crop of doctors.

Then Ansari quit suddenly to go do Parks and Rec, which led to lots of rewriting and recutting that left the first half of the eighth season choppy.

But finally, the season settled into a rhythm, one of wrapping up and moving on. JD’s estranged girlfriend Kim gives birth to their child, forcing JD to grow and take responsibility. Kelso retires. Cox is promoted chief of medicine, Turk to chief of surgery. We even get a cute little episode in the heads of The Todd, Ted, and Jordan. The janitor gets a two-part Bermuda wedding. Something we love is coming to an end.

As all of this change piles up, JD gets a job in a new hospital, so he can be closer to his kid. JD, John Dorian, is leaving Sacred Heart.

The lead character in a workplace sitcom gets a job someplace else. The only thing that can come next is the series finale. And it is a thing of beauty, a two-part episode that uses the conceits of the show to pay off the promises of these characters and without being schmaltzy or sentimental. It is a master class. 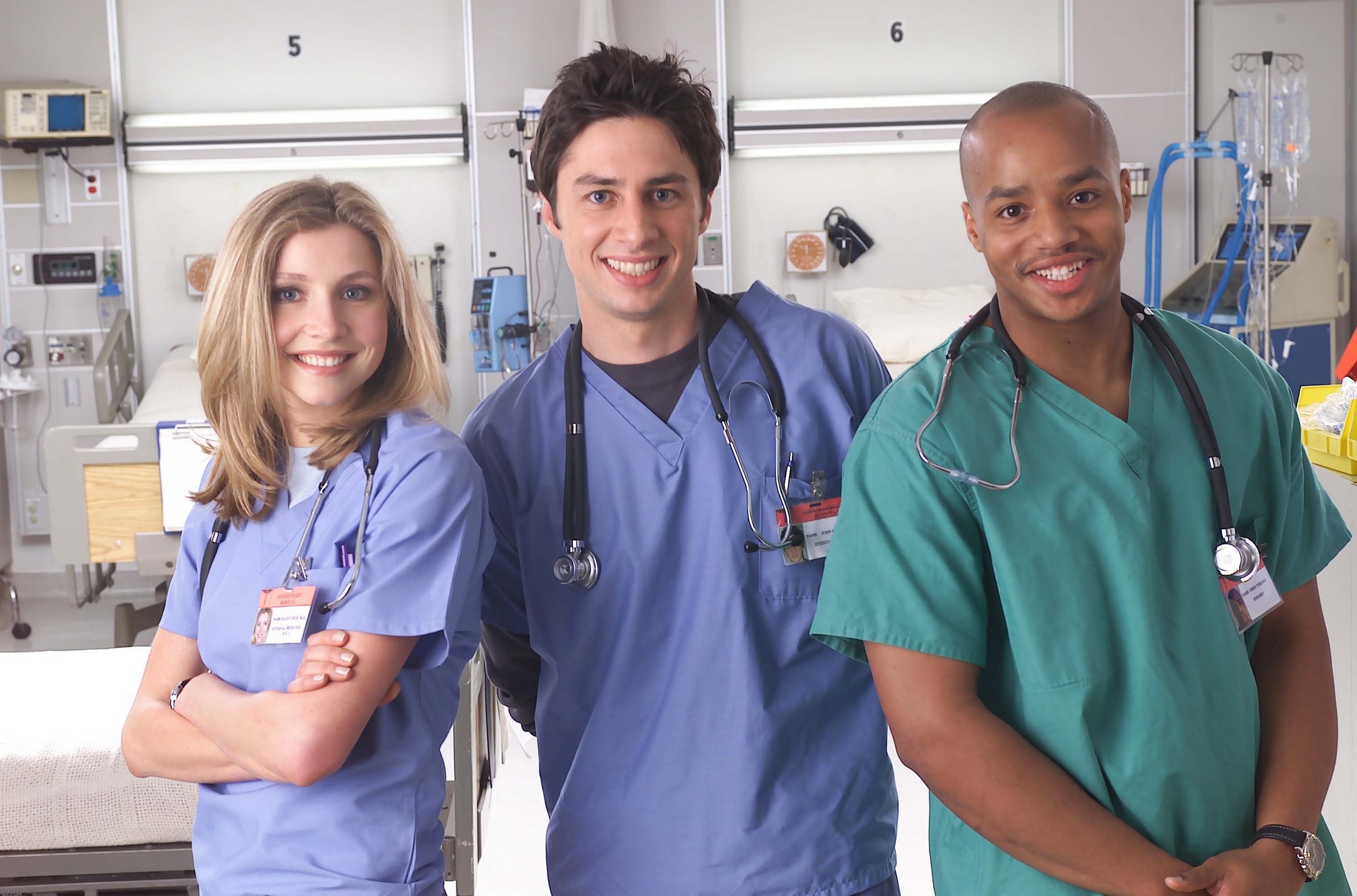 My editor recently called The Office his comfy blanket show; Scrubs is like that for me, and I’m sure you have one or two of your own. What makes these shows so comforting is that they don’t change. We can depend on the characters to be the same week after week, year after year. We need Marcia Brady to be jealous of Jan, and we need Leslie Knope to tackle another selfless project for her undeserving town.

The finale of the sitcom itself goes all in on this premise, I think to great success. If you were to reboot Seinfeld, it would just be the four of them sitting in that same jail cell, horrible people still incapable of introspection or growth.

One of the things that elevates Scrubs for me is that this show lets its characters grow. I mean, of course the characters stayed familiar, but Turk and JD never stopped being clownishly codependent interracial BFFs and heterosexual life partners, and Cox’s cynicism burned hot in every episode.

One of the things that elevates Scrubs for me is that this show lets its characters grow.

But showrunner Bill Lawrence was committed to letting these characters grow right from the start. For example, he decided that Turk and Carla’s relationship would survive everything. Over the years, from dating to falling in love to marriage, babies and associated stresses, they grow with the relationship. We’re not talking seismic shifts—more of a simple maturation like real human beings might undergo as they acquire years and experiences as professionals, as parents, as people.

The way Lawrence pays off this growth in these last episodes of season eight is what sets this finale apart.

It takes place on JD’s final day at Sacred Heart. He says his literal goodbyes to the major characters—and the actors who play them—as he goes about his last day of doctoring. The one goodbye he can’t get is from his mentor, Perry Cox.

JD grew up with an absentee father and latched on to Cox as both mentor and father figure. Cox’s own father was abusive, which left Cox isolated and out of touch with all of his emotions except anger. Their eight-year relationship to this point is a dance of JD craving Cox’s approval and Cox withholding it, the craving and withholding both becoming less over the years as each man matured.

Cox’s need for emotional isolation may have lessened over the years, but his need to project it stayed strong, and on this last day, he is holding on to his icy image with white knuckles, point blank refusing to acknowledge anything special about JD’s departure.

On this last day, however, JD is able to accept this about his mentor. In his final head-monologue about Cox, he acknowledges that maybe Cox is just distant and that’s who he is, but that doesn’t mean JD should be any less grateful for all he’s done.

It’s a head-fake. JD uses an intern to trick Cox into declaring his love and respect for JD as a doctor and a human being after he thinks JD has left the building. Cox’s journey is complete. It feels real because it is real. Cox did the work and, here at the end, the trauma victim who never learned to form healthy attachments can both feel and own his love for his mentee.

JD is, of course, right behind him. Their final scene is a hug.

There is a lovely fantasy scene where JD leaves the hospital. As he’s walking to the exit for the final time, he walks by just about everyone who has swung through Sacred Heart in the last eight years, about 50 bit players, extras, recurring characters, special guest stars, dead people, all there waving him goodbye as he ponders his growth.

The payoff is JD’s final fantasy at the end of this walk. We’ve spent eight years in JD’s head with Bigfoot and floating head doctor, chest hands and Pilgrim village, so of course the final scene will be a JD fantasy.

In this one, JD projects himself into a married life with Eliot. We see their wedding and their kids. He imagines a future friendship and loving extended family tribe built of all of the main characters: Turk and Carla and Cox and Jordan and all their kids. In this future, JD’s son and Turk’s daughter grow up and marry each other, all of this playing over “The Book of Love” by Magnetic Fields. (OK, these last few minutes are a little sentimental, but I can live with it.) It’s a warm, loving fantasy that spins out all of our characters into a happily ever after.

When JD comes back to reality, he asks, “Who can tell me that my fantasies won’t come true, just this once?”

Answer: nobody. They absolutely will come true, and we know it in our hearts. Because, just this once, his fantasy isn’t about Batman and Alfred or a disco ball made from a testicle. Just this once, JD is fantasizing a mature, adult reality. It feels like the proper, earned ending for this show and these characters. And my heart feels peaceful every time those final credits roll

If Bill Lawrence had just stopped there, the Scrubs series finale would be remembered as one of the best show finales of all time in any genre, period, the end.

But he wanted a ninth season, even though most of the stars wanted little or nothing to do with it. You can’t have it both ways, Bill. You can’t have a killer finale and a spinoff. You have to pick.

Dubbed Scrubs: Med School, it was actually less a spinoff than a continuation of the series with fewer characters. The hospital was now on the med school campus, and there were new sets and new characters. While I enjoyed it for what it was, it wasn’t Scrubs. People hated it, and it got canceled halfway through.

You can’t have a killer finale and a spinoff. You have to pick.

Which means that real final episode of Scrubs isn’t a finale at all—just a random, midseason episode. The final scene of that final episode has Turk acting like a dorky dad while trying to impress a cool med student. It is wholly in character for Turk. It is even a reasonably cute moment. It should never have been the final image that Scrubs gave to the world, yet it is. This does both the show and Donald Faison rather dirty.

So now, when I rewatch the series, I watch the eighth season up until the last few episodes, skip to the ninth, and then come back and watch the finale.

It feels so much better that way.