In Its Finale, The Office Gives Its Characters a Send-off Each Deserves

Bob RaymondaNovember 20, 2017Over and Out

The Office (US) is a warm security blanket. For nine seasons, I tuned in to giggle relentlessly at the exploits of Michael, Dwight, Jim, Pam, Stanley, Angela, Kelly, Ryan, Creed, Kevin, Phyllis, and Andy. When it premiered, I was ecstatic over how faithfully it adapted Ricky Gervais’s original UK run, and when it continued long past the original’s expiration date, I reveled in the new and creative spaces the writers and producers explored. Sure, the entirety of the show occurred mainly in the confines of one office building, but the journey, at the end, felt complete and (to me) earned. Now, I’m in the minority when I say this, but I still find the post–Steve Carell seasons of this show to be vital to its full experience. Do they reach the same highs and lows it achieved in years one through four? Of course not, but the new cast members that are introduced were enough to keep me watching, week after week, all the way up until the very end.

When I was finishing college in 2012, I had no idea what I was doing with myself, and I knew that the four-year party I’d just taken part in was coming to an end. I was gloomy, I was depressed, and I didn’t want it to end, but I was ready for The Office to say goodbye. I could tell that the actors weren’t having as much fun as they used to, and the writers were having a hard time sustaining the show’s energy in its second year sans Michael. Still, the decision to finally showcase the documentary at the heart of the show’s conceit injected one last bit of life into the show as it hustled toward the finish line. And the decision to culminate in the wedding of Angela and Dwight, with Jim as bestest mensch up until the moment Steve Carell shows up in his first appearance since his departure two years before? Note perfect.

The culmination of each of these people’s lives served as such a gleeful bit of wish fulfillment that the writers might have benefited from taking a few more risks (I know that I was weirdly interested in the seeming disintegration of Jim and Pam’s fairy-tale relationship, and part of me to this day wishes they had committed to that idea), but this is an episode I can find myself turning on and crying the same tears I cried five years ago all over again. Regardless of how much I enjoyed the last few seasons, I still find myself thanking whatever broadcast gods decided Dwight’s backdoor spinoff pilot, The Farm, was a terrible idea. Why sully a good thing? 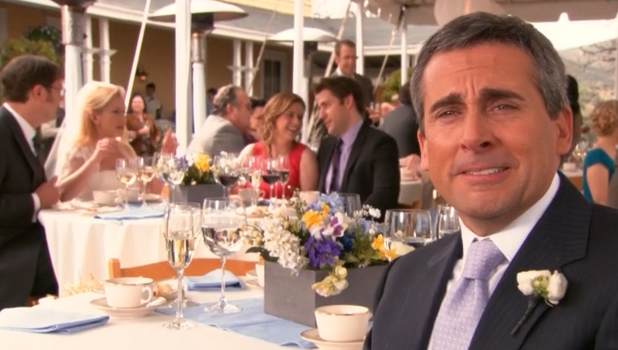 As I rewatched the finale, some of the cracks I was more forgiving of in the past definitely started to show. Andy’s whole last-season arc, after changing from a lovable Yes-Man with an anger problem to (frankly) a complete and utter asshole, didn’t always work for me. And in the finale, when they play an autotuned music video version of his emotional breakdown from a few episodes before, it dates itself considerably. Plus, when Oscar indignantly joins the men for Dwight’s bachelor party instead of going to Angela’s bachelorette and breaks out his frattiest ’99 Budweiser “Whassup?” commercial impression, I definitely cringe.

Still, these moments are thankfully spread out in the middle of several more that reduce me to a sniveling mess. When Andy walks out to tell the managers of the panel that they’ll cancel for low attendance and is instead greeted by a huge group of people yelling his signature “Rih-dih-dih-dih-doo”? I choked right up. When Joan Cusack and Ed Begley Jr. show up as Erin’s estranged parents? Tears flowed freely. And when Michael Scott’s first line in over a year and a half is “That’s what she said,” I happily sobbed. And finally, at Dwight and Angela’s wedding, when Phyllis is ruminating on how much of a grump everyone thinks Stanley is and reveals the bird-legged wood carving he made of her? I choked up all over again.

You see, as much as this show trafficked in absolute wish fulfillment toward the very end, almost every single piece of last-minute character development feels true to who these people were at the beginning. Stanley gets his retirement and is delivered his divorce papers by fan boat at his new home in Florida City. Jim and Pam (and Dwight and Angela) get their dream careers and pitch-perfect families. Michael marries Holly and has to buy two cell phones to have enough room for all of the photos of their children. Nellie gets her baby, even if it is the one that Ryan abandons to Kelly’s boyfriend while convincing her to run away with him. Meredith cops to her alcoholism but bemoans PBS’s inability to shine a light on the PhD she’d been earning the whole time. Toby moves on from his life in Scranton to something even more seemingly dark and depressing: writing a novel and living with six roommates in New York City. And Andy, after all of his years talking up his time at Cornell, finally gets to go back there forever.

There’s something to be said for media as unflinchingly feel-good as The Office. Maybe it’s because it maintained a stellar ensemble or because it never dipped its toes into the kind of schlocky morals-driven material of other sitcoms of their ilk. But no matter what it is, The Office is a show I can count on—no matter what time of year it is, no matter how happy or sad or bored or depressed I am—to make me laugh, to make me cringe, and, when it really comes down to it, to make me cry. And I won’t stop watching it anytime soon because of that.